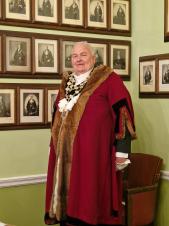 Cllr Nigel Brown's Mayor Making Ceremony took place on Monday 9th May 2022. Councillors and invited guests gathered in the Council Chamber to witness Cllr Brown take his oath and be declared the Mayor of Higham Ferrers for 2022-23.

"I am honoured to be your Mayor for the next year and I would like to thank Cllr Tina Reavey for doing such a great job as Mayor over what has been a difficult 2 years.

I found myself joining the council quite unexpectedly after falling into conversation with Cllr Smithers and Cllr O'Rourke a few years ago, who told me all about how the council worked and encouraged me to come to meetings. I would like to thank them both for their support as I wouldn't be here as your Mayor today without their encouragement.

I am looking forward to meeting the people of Higham Ferrers and also getting out and about in the county representing the town as your Mayor. I have an extremely good Deputy Mayor at my side and the support of my wife Jackie as my Mayoress.

This year I will be holding some fundraising events and my chosen Mayoral charity is Northants Search and Rescue, who do amazing work in and around the county.

I am going to try and attend the farmers market every month and hope to see some of you there.

Any queries for me can be directed to the Mayor's Secretary at info@highamferrers-tc.gov.uk."