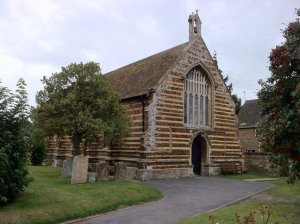 At around the time that Henry Chichele was planning his College he founded 'in a place adjoining the Vicarage and the Churchyard' his Bede House or Hospital to be a dwelling place for 12 men over 50 years old to live in 'close company' with one woman to look after them.

In the manner of the time they lived together in an open hall with each man having his own little cubicle or locker, divided off by a screen from his fellows, and the rest of the room forming a large open space with a large fireplace, a relic of even older times. In the South a garden was added by taking land from the Vicarage.

Chichele provided that each old man and woman should have one penny per day, this being at the time that a workman earned no more than a shilling a week, and the Bedesmans silver penny was in real terms worth more than a modern old age pension. He could afford to buy meat for his Sunday dinner with enough to be put aside to be 'powdered up against Wednesday' by the Bedswoman.

Each Bedesman had besides 'As much black frieze as to make every man a gown and the woman also', with five shillings being allotted for filling the lamp that was to hang in the middle of the hall, and five shillings for the barber to come and shave them on Friday at noon, dress their heads and make them clean. Every year they had nine loads of wood against Christmas and 10 shillings for charcoal or other fuel for a brazier to heat water for washing.

One of their numbers was to be chosen as the Prior and they were under his authority, with none of evil character being permitted to join. If any offended by brawling, being drunk or chiding the others they were to be fined one penny for the first offence, two pence for the second and any subsequent offence bringing expulsion.

The Bedeswoman too had to be of good character, quiet and honest 'no brawler or chider, but glad to please every poor man to her power, and if she will not be ruled then the Prior and the Warden are to put her away and find another.'

Like most medieval foundations the basis of the charity was founded on prayer. The word Bede means prayer and the twelve men had to live by a definite rule divided in monastic style into periods of prayer and manual work in the garden. The began each day in the summer at 7.00a.m. and 8.00a.m. in the winter with the morning office, Matins, and followed that with an hours meditation. On all feast days and Sundays they would attend Mass in the Church or Bede House, and they were to pray for the Kings most excellent Majesty, for the Royal Family, for the faithful departed, and for the founders of the charity Henry Chichele and his brothers, and 'all others that they shall fare the better for.'

Although the Bedesmen no longer live in their communal life they are still appointed and wear cermonial cloaks with a red star, together with the appointed Bedswoman, for all civic occasions and for their feast day that of St. Thomas before Christmas, the 21st of December, when they meet for a service in St. Mary's Church and then adjourn for a meal in the Bede House and to sit by a roaring log fire and remenisce of former times.

The Bede House is now used by all kinds of groups for activities, and has recently undergone major re-furbishment to the kitchen, toilets and committee area to bring them up to a modern standard including facilities for the disabled.