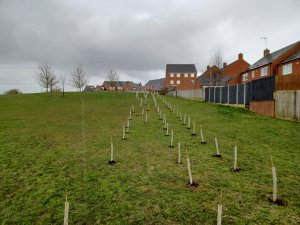 It has now been eight months since the residents of Higham Ferrers turned out in numbers to plant 420 tree saplings on 'Higham Heights'. So how have they progressed?

When writing the four-month update in the early days of July, I was pleasantly surprised on how well the saplings were doing. Of course, there were the expected losses; but many were thriving and had made substantial growth. In addition, the sapling area was being transformed into a small wildlife haven with many kinds of flowers taking root, which in turn attracted a variety of insects. The area was continually changing as the summer months progressed. However, that was before the long dry spell that we experienced over the remaining months of the summer and into September. Saplings do not do well without any water for a long period of time as their roots have not penetrated the soil deep enough to avoid the sun-baked topsoil. So, unfortunately, we lost some of the saplings. Although this was very disappointing , the council is committed to maintaining and improving the green spaces in Higham Ferrers for the community to enjoy, so it was agreed to replace 150 of the saplings in November. I (Cllr Gerald Kelly) and Cllr Bert Jackson with the assistance of the Community Payback Team spent a lovely three hours on a crisp November morning planting another batch of saplings. It will be great to watch them grow over 2023 and hopefully there will be enough rain over the summer to help them thrive.