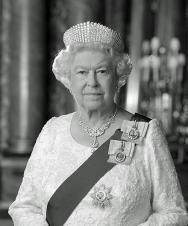 Higham Ferrers Town Council join with people across the country and the globe in sharing their sadness at the passing of our late Sovereign, Queen Elizabeth. We remember with affection and gratitude the lifetime of service given by our longest-reigning Monarch.

As a mark of respect both the Higham Ferrers Town Council flag and the Union flag outside the Town Hall are being flown at half mast.

At this time we reflect with fondness on the visits of our late Sovereign to her Duchy of Lancaster Estates in Northamptonshire. On the 9th July 1965 the late Sovereign attended the town with her husband, the Duke of Edinburgh. They were received at Chichele College by the Chancellor of the Duchy and met Duchy farm tenants before proceeding by car to the Market Square where, before the gathered crowd, presentations were made and they were invited to sign the visitor book and photographs of themselves. The visit concluded with a conducted tour of St Mary's Church.

The war memorial to the front of the Town Hall is open for those wishing to lay flowers or for your own period of reflection.