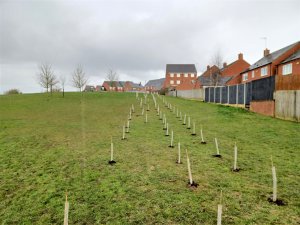 Higham Ferrers Town Council was keen to engage with the Queen's Green Canopy Project as not only is it a worthwhile project, but it also sits nicely within the council's ongoing projects to further enhance the green environment around Higham Ferrers. By the turnout on planting day, it became very apparent that that the Higham Ferrers community are also very passionate about greening Higham Ferrers and developing green spaces into enjoyable walking experiences.

There were 420 saplings to plant: Silver Birch, Rowan, Wild Cherry, Dogwood and Hawthorn. At 9:30am Town Councillors were looking at a vast empty space and boxes of saplings hoping that the community would turn out. However, by 10am it was obvious that concerns were unfounded as the space was filled with eager tree planters. People came from all around with spades and garden forks. Higham Ferrers' Rainbows, Brownies, Beavers, Cubs and Scouts turned up and enthusiastically got to work, families turned up, dogwalkers joined in and so did their dogs. Even the Higham Ferrers Archaeology and Research Society came. They were hoping to unearth remnants of Higham Ferrers' past and the dogs were hoping to unearth some bones; however, both were to be disappointed. Unbelievably, by midday the planting was completed. Everyone had a great time and questions were being asked about whether there will be a tree planting day next year.

Cllr Gerald Kelly said – "I was amazed by the enthusiasm that everyone had for planting trees. It was a fantastic morning. It is clear that the people of Higham Ferrers want the green environment enhanced, which is why the Town Council is working to develop many environmental projects. Also, a thank you must go to the Wildlife Trust as they kindly lent Higham Ferrers Town Council a variety of spades to assist with the planting."