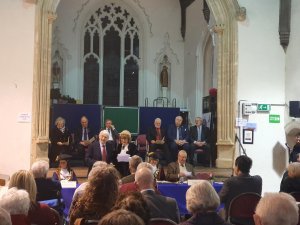 On Friday 18th February, Derek Lawson MBE and Richard Gell were recognised for their long and outstanding service to the community with the presentation of Honorary Freedom of Higham Ferrers. Despite the extreme weather the ceremony and reception at the Bede House was attended by 70 invited guests

In 1964 a young Derek Lawson was elected to the then Higham Ferrers Borough Council. He saw the formation of the East Northamptonshire District Council which led to Higham Ferrers becoming a Town Council. Derek completed the longest serving member of the Town Council with over fifty-seven years service. His knowledge of local government is vast, and his experience is second to none, this has proved invaluable to many as he is always on hand to give good sound advice when needed. Derek was a member of the East Northants District Council for over twenty years, where he was Chairman 1987-88 . He was also a Member of the Northamptonshire County Council for forty years and Chairman 2007-8. Derek was Vice-Chairman of the Police and Crime Panel which was part of the Northants Police Authority before the position of the Police and Crime Commissioner was created. Among Derek's other long list of achievements are Chairman of the Board of Governors at both the Ferrers School and the Henry Chichele School. He held the position of Chairman of the TASH (Towards a Safer Higham) Panel, being involved in the campaigns for "Yes to Rushden Lakes" and played a big part in the Chowns Mill Roundabout Improvement scheme. He was also heavily involved in the preparation of the Higham Ferrers Neighbourhood Plan. Derek has been a very well respected Mayor of Higham Ferrers on three occasions, and the Leader of the Council for five. For all his years of commitment to local government, Derek's work was recognised when he was awarded a well deserved MBE in 2007.

Richard was a member of the Town Council for over 37 years, serving firstly as a Conservative Councillor before going Independent. Richard stepped down in 2019 but has always kept the connection with the Council through his role as the Parish Tree Warden. Over the years his advice has proved to be invaluable. Being very involved with the Greenway Project, he played a big part in the extension through to Kimbolton Road. He advised on the Interpretation Boards, not only along the greenway but also the new Nightingale Way play area. For several years he was the Council's representative for the Angling Association, and despite admitting that he knew little about fishing itself he was a tremendous help to them with all the improvements made along the river, and being a member of the Ramblers Association, he was involved with the improvements to the Wharf Road Pocket Park. I doubt there is a public footpath in the Town that Richard could not give you the VC number for. Richard was elected to the East Northamptonshire Council in 1999 where he served until the recent disbandment. He was part of the Planning, Licensing and Scrutiny Committees. He also tended the Council flower beds, and could often be seen tending to the dahlias, making sure there were no weeds. Richard has been Mayor twice, once in 1983-84 and again 2015-16 when he played a very active role and was very well respected. I doubt that there are many local people that Richard doesn't know, but he will always say hello and have a chat. Being a mine of information, you could ask him a question, and if he didn't know the answer, he will always find it from his endless books, press cuttings and photographs, some going back many years, and would love telling you about them.