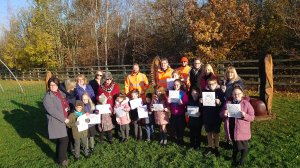 Children's designs are sitting pretty as unique gifts for the town were unveiled by the Mayor, Cllr Tina Reavey.

Three large chairs carved with the artwork of local schoolchildren have been donated to Nightingale Way Play Area thanks to the National Highways Chowns Mill Roundabout Improvement Scheme.

A small number of trees had to be felled as part of the £24 million scheme at the A45/A6 Chowns Mill roundabout. To ensure the trees were not lost to the community, three sections of trunk from an oak tree have been turned into three ornate chairs. One has a giant acorn seat, the second a conker base and the third a hazelnut.

Children from Higham Ferrers Nursery and Infant School, Higham Ferrers Junior School and Henry Chichele Primary School were invited to come up with some nature-themed designs to decorate the large leaves which make up the backs of the chairs – with around 5ft by 3ft space to cover. Some 100 entries were received with the Mayor and woodcarver Carrie Yuen having the difficult job of choosing the 30 winning designs to be carved into the chairs.

The chairs were officially unveiled by the Mayor on Monday with some of the children on hand to see their works first-hand.

"I couldn't be more thrilled and honoured to have unveiled the carved chairs. They have been skilfully crafted by Carrie, who has taken the children's designs and worked them so beautifully into the backs of the chairs. It wasn't easy for us to select the winning designs with so many creative entries to choose from. All the children who took part in the competition are to be congratulated.

"I'm grateful to those who have worked so hard on the project team to bring the timber from the felled oak back to a site close to its original home. These magnificent giant chairs are going to be enjoyed by many future generations."

"In what has been an unsettled time for the children, this was a lovely inspiring project. It is wonderful that their creativity is part of the community and can be shared by all. We are very proud of the children."

"We are very pleased to be part of this project which allowed our pupils to get involved with the community developments. The designs look great and our children are incredibly proud to see their work on display and so they should be!"

"This has been a great project for the children to take part in and one that continues to build on their love for their local environment. We are very proud of all the children and know that they will enjoy sitting on the chairs that bear the pictures they created for many years to come."

"Ground Control cares for our environment and champions supporting local communities, which is why we were happy to sponsor the artwork of the chairs. We believe firmly in actively engaging children in nature, especially where they can make such a positive impact. The artwork is outstanding! We're proud to be part of such a wonderful project."

Each of the schools was also given a piece of carved art to display as a thank you for taking part in the competition. These included an owl, a squirrel and a table and chairs.

"The children have clearly worked really hard on their designs and the end result is incredible. The chairs look fantastic and can now be enjoyed by local people for many years to come.

"We only remove trees when absolutely necessary and try to redress the balance by including extensive tree planting in our plans. Around 2,000 trees are being planted in and around the Chowns Mill roundabout as part of the improvements.

"But we do appreciate that the trees are important to people so we are delighted to ensure they have a legacy in the community."