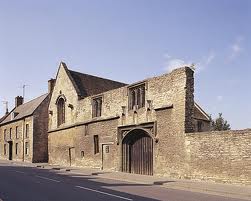 The College founded by Henry Chichele in 1422 was for 8 chaplains, one of whom was to be the Master or Warden, 4 Clerks and 6 choristers.

One of the Chaplains or Clerks was to be assigned to teach grammar and another singing instruction. The public foundation of the College took place in St. Mary's Church on 28th August 1425 with Archbishop Chichele present, together with many other notables. John Small was appointed the first Warden, but no other School master was present.

On 17th July 1428 the Archdeacon of Northampton who had jurisdiction over schools granted he Warden the power to nominate a new Schoolmaster and pay him out of the College Funds. He also provided that no other school should be set up within 10 or 12 miles, saving the existing schools at Northampton, Rothwell and Oundle. The appointment appears to have been made as William Dyne, Master of the Scholars, took over a tenancy of land for a period of 50 years from Michaelmas 1428 for the benefit of himself and his successors in that office.

In the absence of College Registers it is difficult to follow the history of the College for the next century, save that it continued to appoint the Masters of the School, and the College was surrendered to the Crown on 18th July 1542, and on 17th April 1543 the College lands, but not the buildings, were granted to a Robert Dacres.

From this point the buildings fell into disuse and disrepair and seem to have had many different uses including being used as a farm or farm buildings at one point. In 1948 The Ministry of Works took over the College and set about repairing the ravages of several centuries of neglect.

The restored buildings are now used for public art exhibitions and similar events and the College Grounds are open to the public.